Here is the inside of the first Things Network LoRa gateway in Cambridge, UK. The gateway serves the west of Cambridge (other Things gateways will following covering the centre of Cambridge).

I did not want to wait for the pre-built Things Gateway (and thought it would be more fun to build my own).  This Gateway is my home assembled Raspberry PI/IMST iC880a combination with the simple Tindle backplane.

So in above photo there is a Raspberry PI on the bottom , then the Tindle sold interconnect PCB (just carries connectors for the SPI interface and a power connector, hidden above between sandwich of boards) and then the IMST iC880a that provides a professional multi-channel LoRa gateway radio. I used a Raspberry Pi 3 to allow me to use WiFi to connect to the Things Network in the future.

All the parts list, software and full instructions are on Github within the ttn-zh/ic880a-gateway project. I just followed the instructions without any problems. I did give the node a static IP address. The node then connected perfectly though my NAT home router to the Things Network in about 30 seconds (once I had remembered to tell the Things Network to expect the new gateway). The whole things was built and working in a couple of hours.

The gateway has now been working for a couple of weeks, has been totally reliable, and has received about 50,000 messages. I have hardwired the power connection from the plug in PSU, rather than relying on the micro USB connector.

The completed node with the cover removed is shown below. The USB keyboard, mouse and HDMI and display were for some testing (and are not needed to build the project). The node is now deployed in my loft with just power and Ethernet connected (I could have used WiFi). 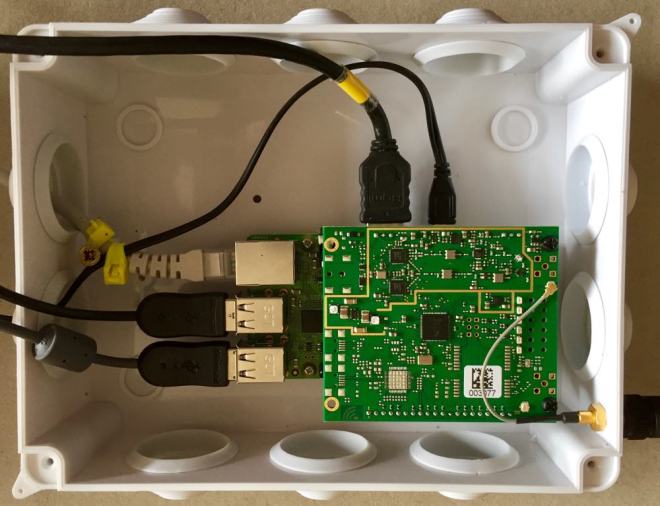